I originally planned on sending out bi-weekly emails, but after typing out this past week I decided adding another week would make this way too long.

I LOVE traveling. Every time I go out with friends we meet the most interesting people at the local bars and pubs. Yesterday I met a socialist, bordering on communist, from New Zealand who believed among other things that no one deserved or should make over $300,000 per year. I did not necessarily agree with him, but it was fascinating to hear his reasoning behind it. Later the same night we met a couple from Toronto living in Dresden, where I went last weekend, for two years working for the “automotive industry.” He gave me his contact info for the next time I’m in Germany along with a plethora of idea of where to travel in Europe. I think I am going to scratch Italy and go to Brussels instead now. Oh, and I met a British lad who told me to contact him when I’m in London later this week!

It is such a unique experience of people from all over the world meeting in one place and at first all you have in common is that you speak English and are from a different country.

Moving on, Czech culture is not like Western European culture at all. A few things I’ve noticed in my first three weeks here:

-People on public transportation always give up their seat to the elderly or disabled.

-Life moves at a much slower pace here. On weekends coffee shops don’t open until at least 9 or 10. Luckily I’m not moving much before then either.

-Prague is a verg dog-friendly city, however it is not appropriate to pet every dog you see. Dog are either given complete freedom or none at all. You’ll find some walking next to their owner without a leash or it will be leashed with a muzzle on. Apparently the government passed a law requiring dog owners to have their dogs leashed at all times, but clearly not many are following it. Side note: picking up dog poop is not something people do here. Just be sure you watch where you walk unless you want a chocolate surprise on your shoe 😉

-Not sure why, but personal hygiene and deodorant are not taken seriously here. It wakes me up on my way to class, at least.

-PDA is about as common in Prague as cobblestone sidewalks.

-Finally, getting my haircut by someone that does not speak a word of english is one of the more terrifying experiences I’ve had recently.

Beautiful cultural differences surround me every day. I love it. 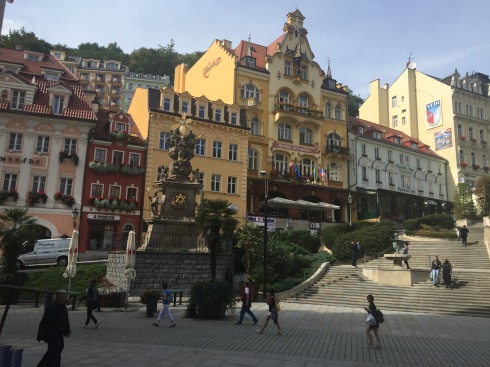 As I mentioned in my last email, I went to the spa town Karlovy Vary last Friday. Karlovy Vary has 13 natural hot springs, and people from all over Europe descend on the city to take advantage of the baths there. You can even drink the water, however it has a high mineral content which works as a laxative if you have over .5L. I made sure that did NOT happen. More importantly though, you can get a full service 4 hour spa treatment for $70…Fun fact: scenes of Casino Royale were filmed outside the 5-star hotel there and there is a famous film festival held every year in July there. (Many films set in Western Europe are filmed in the Czech Republic because it is so inexpensive.)

I decided not to go to Auschwitz last weekend and instead my friend Josh, who is studying in Budapest, came to visit instead. It was seven months since I last saw him and we picked up right where we left off. (We went to Israel together three years ago and I forgot how easy it is to travel with him.) In about two days we covered almost 24 miles around the city by foot seeing just about everything. My legs are still sore. I’m also convinced that I found the best gelato place outside of Italy that weekend and really wish I didn’t know it existed. Luckily we get to see each other in London in 5 days

Perhaps the most interesting place in Prague is the John Lennon Wall. What is that? Glad you asked. Towards the end of communist rule, rebels would spray paint/graffiti the wall daily with John Lennon quotes about peace and freedom. Each night the government would paint over the wall. This quiet but powerful statement let people speak up against communism, since government protest was useless. Now it is a symbol of free speech in a former communist state.

Every day I am making it my goal to discover one new place in Praha. Today, I stumbled upon Cafe La Boheme where I got a pot of loose-leaf lavender tea and read my book for 2 hours. It was definitely the trendiest place I’ve been to in Prague thus far and reminded me a lot of Oregon actually. I posted photos of the Cafe in my photo stream earlier today, it was beautiful. Side note: while walking around, I noticed how cute the surrounding shops were, Italian cheese shops, boutique shops etc. I later find out I was actually in Prague’s gay neighborhood. I must really fit a certain stereotype.

I am the happiest I have been in a very long time. Between my internship working for The Points Guy in New York and now living in Europe for 4 months, my life seems surreal. Every day for the past four months I wake up thinking “can it get any better than this?” and then it does! I cannot get over how lucky I am to be afforded these incredible opportunities. I never forget to count my blessings, because I know how rare it is for a 20 year old to do this.

Lastly, I’m spending five days in London starting Thursday. If any of you have recommendations of places to go or things I must do, please let me know!

If you would like to be added to my iCloud photo stream…let me know your Apple ID (iPhones only)! Follow this link to see all of my pictures thus far, I post new ones almost daily: Mark in Europe